07 Mar The Power of Six, Sixth-Graders

Posted at 18:58h in Blog by imaginedragons 0 Comments
0 Likes
Share 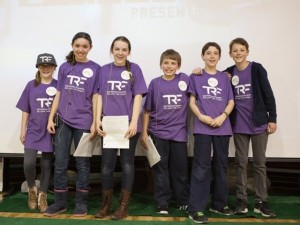 So what if they’re only 11 and 12 years old? When children get together to become a force for good… good happens.

And that’s exactly the case when Boulder, Colorado sixth-graders decided to rally their community together to make a profound difference in the life of a young boy who is fighting brain cancer.

After a little online digging, the students found the Tyler Robinson Foundation and began formulating a plan and a sizable $9,000 fundraising goal.

All this to help Cade Humphreys.

Two years ago, Cade’s mother unexpectedly died, leaving his father as his sole caregiver. Then late in 2013 this seven-year-old was diagnosed with brain cancer.

As happens in many pediatric cancer cases, Cade’s father, Seth Humphreys, quit his job to provide the intensive care that Cade needed.

Cade has had surgery and just last week, a bone marrow transplant.  He is recovering, but the battle will continue on.

Part of that battle is the elephant in the room: a decrease in income combined with nearly insurmountable ancillary treatment costs.

So on March 4, 2014 to honor the anniversary of Tyler Robinson’s passing, and help young Cade, the event Clap for Cade was professionally produced by these remarkable sixth grade students.

The family-style event included a clapping game, and other fun and innovative activities that opened up the hearts and wallets of the Boulder community. See for yourself the force for good of these six, sixth graders.

To date, $6,000 has been raised to benefit Cade Humprehys and we know that you can help these kids reach and even surpass their $9,000 goal by the March 15 Imagine Dragons concert in Denver!

Make a donation today on the Clap for Cade – You Caring website.